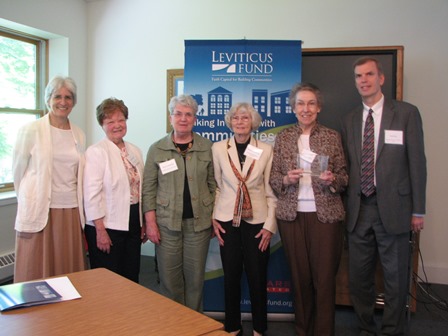 The Ursuline Sisters of the Eastern Province, a community of Catholic women engaged in education ministries from elementary to collegiate levels across the globe, was the recipient of the 2016 Leviticus Cornerstone award.

Founded in 1535, the Ursuline Eastern Province members serve in four eastern states through educational ministries as well as those involving the arts, law, corporate responsibility, health and hospice care, and service to the aged, homeless, people with AIDS, and victims of human trafficking. The Ursulines are one of the 27 founders of Leviticus and remain active members and investors to this day. Over those 35 years, several Ursulines have also volunteered on our Board of Directors and held positions as staff members.

Beyond investments, the Ursulines have also used their land to support community development efforts focused on low-income residents. On the campus of their Academy of Mount St. Ursula in the Bedford Park section of the Bronx, the Ursulines have undertaken three distinct affordable rental housing projects. The first two projects, Serviam Gardens and Serviam Towers, developed 243 affordable units on nine undeveloped acres and included a ‘green’ roof to recycle collected rainwater. Serviam Heights is the site’s third project and involved the conversion of an existing four-story convent into 57 residential units, plus construction of a new, nine-story building.

“It is our privilege to have been one of the founding members who, in 1983, had a vision for justice and took a step toward that vision by lending in communities where resources were scarce. We are very proud to accept this award.”