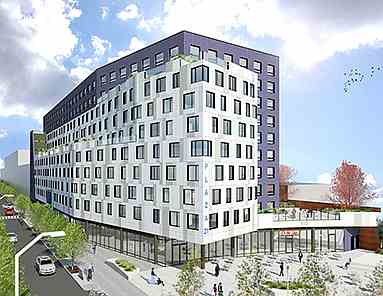 The Community Builders (TCB), a regular partner of the Leviticus Fund, has created over 29,000 units of affordable and mixed-income housing across 14 states and D.C.  This December, TCB sought out Leviticus’ Project Start Fund (PSF) for $700,000 in critical predevelopment financing to advance the Beach 21st Street Development, a 224-unit mixed-use affordable housing project that will help to anchor the revitalization of the Far Rockaway neighborhood of Queens, NY.

TCB’s Beach 21st Street project will be a ten-story transit-oriented project that will convert a large parking lot into 224 affordable homes, 10% of which will serve the formerly-homeless and 60% of which will serve those below 60% of area median income.  The building will also include commercial space for a large restaurant and a community space, which will be used as a childcare center.

The project will provide residents with stable homes, child care access, and community in a central and transit-friendly location. Further, as an anchor in the Downtown Far Rockaway Urban Renewal Area, it will spur new investment and enhance the economic potential of the Queens neighborhood.

As with other Project Start Fund loans, our $700,000 predevelopment loan to TCB will have a low interest rate and flexible terms, and it will serve as a critical financing bridge from project concept to development.  This loan is the fifth loan we have committed or closed using Project Start Fund, which launched in June 2018 using a $2.75 million award from the CDFI Fund’s Capital Magnet Fund.